Torn down but not gone, the voices of Sungei Road live on in this piece of verbatim theatre.

10 July 2017. For most people, it was an ordinary day. But for the vendors of Sungei Road, that’s a date that marked the end of their lives as they knew it, the official day the historic Thieves’ Market was closed for good, and its inhabitants displaced and dispersed. Collecting the voices of vendors from Sungei Road, alongside a smattering of excerpts from politicians, tourists and social media, One Metre Square: Voices From Sungei Road is a chronological piece of verbatim theatre that charts the last days of the Thieves’ Market and the ensuing destinies of its inhabitants. Through these excerpts, audiences learn to mourn the loss of one of Singapore’s most remarkable organic ground-up phenomenons. 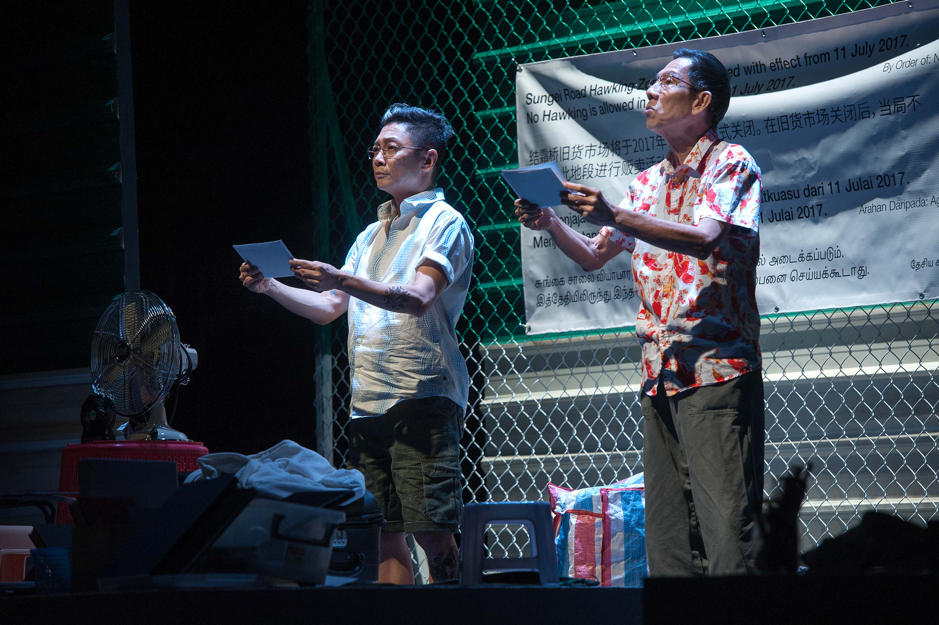 Leading these interviews are five endearing personalities, each given life by a strong cast comprising Ong Kian Sin, Tay Kong Hui, Tan Beng Tian, Yong Ser Pin and Michael Tan. Ranging from chairman of the Association for the Recycling of Second Hand Goods Mr Koh Eng Khoon, to a vendor who writes poetry in his spare time, affectionately known as Ah Chua, the stories of these vendors are never played for pity. Instead, co-creators Zelda Tatiana Ng and Sanmu shape the play such that these stories form a narrative and atmosphere of a thriving, bustling community that Sungei Road once offered. We are given brief insight into each of these five anchor tenants’ lives, and are left curious to check in with them, wondering what rich lives these Pioneer Generation folks might have led. There is a thread of loss that runs through the entire play, as these characters reminisce on their past, and look back on halcyon days with nostalgia. 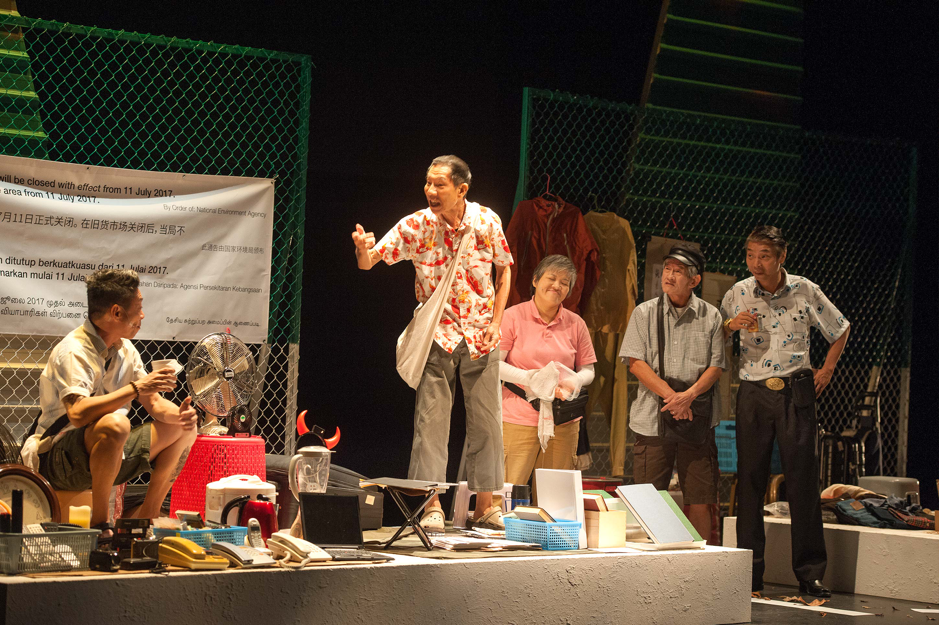 While these five vendors are certainly interesting enough as main characters, touching on incidents such as ‘the scholar’ recalling his school days in Hwa Chong to complaints from ‘Liang Po Po’ on how cheapskate Singaporeans can be, One Metre Square makes an effort to broaden the scope of its demise by presenting the views of others come to become involved. Controversy breeds response, and we hear voices from The Online Citizen, Facebook interest groups suddenly fired up and even ministers explaining the reasoning behind the shutdown. These single person excerpts are often taken on by more than one cast member, as they don colourful spectacles to differentiate themselves, reading off pieces of paper that they then haphazardly throw away, re-emphasising the idea that Sungei Road has been just as casually disposed of. One sees these moments as the main five vendors playacting and caricaturing these external voices, which while good-natured for some, essentially becomes noise that still cannot affect their ultimate fate. 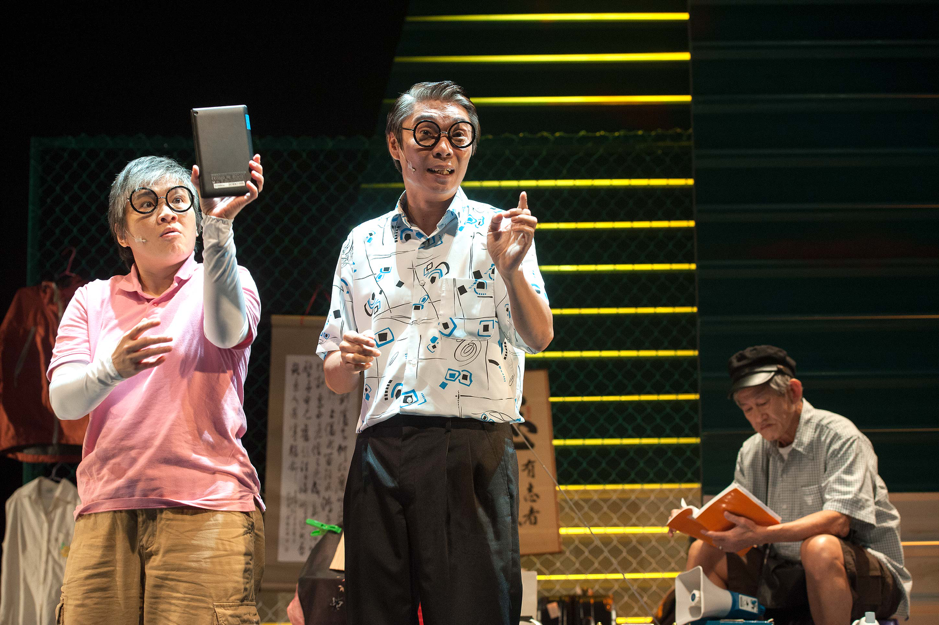 As a piece of verbatim theatre, One Metre Square plays out like a documentary, rather than a gripping piece of emotional drama. One cannot fault the content of the script itself, since the words are culled from actual interviews, but wishes that the staging, inclusion and arrangement of these excerpts might have been realigned such that it offered a more affecting look at loss, rather than the more cavalier result this play has achieved. Moments like Koh being accused of sending threatening letters feel like potential to offer stronger criticism of lapse in governmental judgment, but end up merely suggesting, not tackling such issues head on after it segues into the next scene. One Metre Square has a choice to either go into an emotionally arresting story of loss, or to go full political and tie the destruction of Sungei Road to a greater, national and historical perspective. However, the play seems unable to decide which direction to land on, resulting in a production that meanders and acts as historical account, rather than urgent drama that demands a change in mindset. 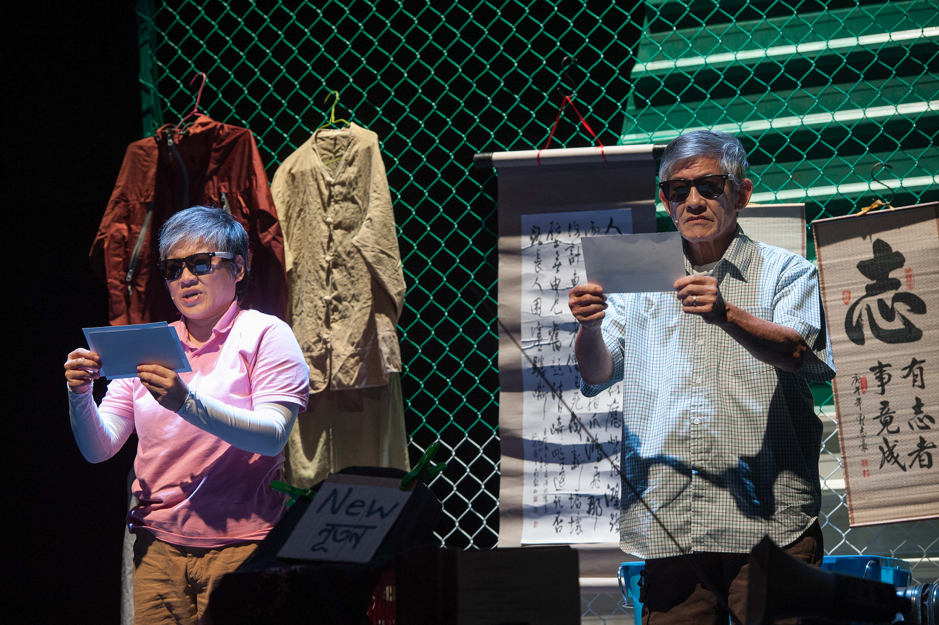 Grace Lin’s set makes a good effort to replicate the environment of Sungei Road itself, with towering fences, the banner declaring the ominous final date of 10th July 2017, plenty of vintage paraphernalia and even shopping carts and black trash bags strewn in front of the stage. Even so, one feels that veteran sound and light designers Bani Haykal and Lim Woan Wen’s skills were underutilised in this performance, while the multimedia design could have been more strongly integrated and woven into the performance itself, such as how it excels when displaying the beautiful rhyming couplets written by Ah Chua for stronger visual, emotional emphasis. 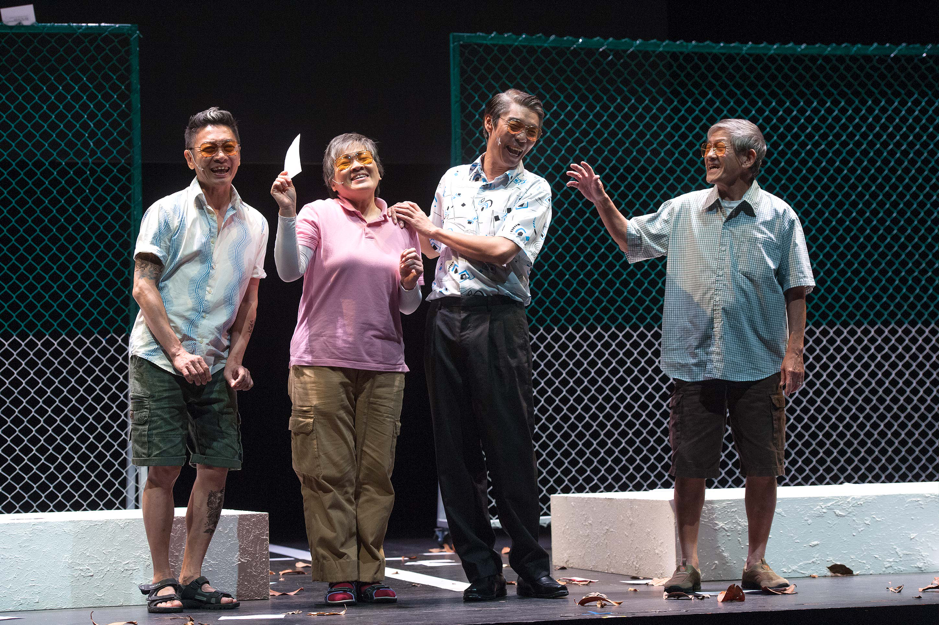 One Metre Square ends on an ambiguous note as the once inhabitants of Sungei Road go their separate ways towards an uncertain future. What they leave behind are these voices of lament and loss as yet another piece of Singapore’s history disappears before our very eyes. It is through this play that the team behind One Metre Square seeks to remind audiences that a single ending affects many more, and acts as a call to preserve the landscapes of today before they become a faded memory tomorrow.

One Metre Square: Voices From Sungei Road played at the Singapore Airlines Theatre at Lasalle College of the Arts from 19th – 22nd July, in Mandarin, Hokkien and Cantonese with English surtitles, as part of the 2018 Singapore Theatre Festival.