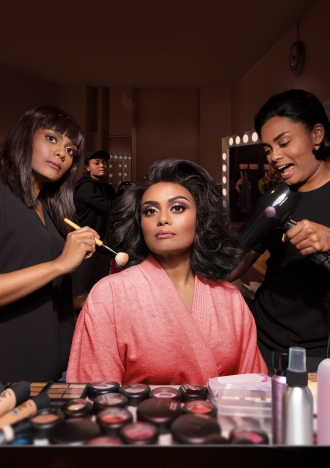 When we first saw Rebekah Sangeetha Dorai onstage in Boeing Boeing last year, we knew she was something special. She’s proven that again when we last saw her onstage at the Arts House in The Page On Stage, and we were overjoyed to see her get a chance to take the spotlight all on her own in an upcoming solo show in the 2018 Singapore Theatre Festival.

As a young Indian actress, there are times blatant racism gets in the way of casting calls, insisting ‘Chinese or Pan-Asian preferred’ and told ‘You’re pretty for an Indian.’ She’s tried to change her accent to sound more ‘ang-moh’ and receives better service as a result. Is acting a form of escapism for Sangeetha? Or is it a means for her to get closer to the truth? Why aren’t there more Indian actors onstage, and to get a role, does she have to put on thick makeup to lighten her skin?

Directed by Mei Ann Teo, inspired by Konstantin Stanislavski’s second handbook on acting and written by poet-playwright Ruth Tang, Building A Character promises an intimate look at what it means to be a minority in society today, and all the hangups and expectations that comes with. Watch Rebekah Sangeetha Dorai bravely bare her soul onstage as she discusses issues of trauma, transformation and even time travel in this brand new solo work over the 2018 Singapore Theatre Festival’s opening weekend.

Building A Character plays from 5th – 8th July at Creative Cube at Lasalle College of the Arts as part of the 2018 Singapore Theatre Festival. Tickets are now SOLD OUT.